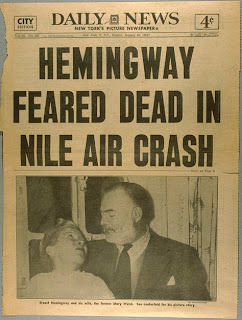 Hemingway Out of the Jungle; Arm Hurt, He Says Luck Holds
By THE UNITED PRESS

His head was swathed in bandages and his arm was injured, but the novelist, who is 55 years old, quipped: "My luck, she is running very good."

He was carrying a bunch of bananas and a bottle of gin. With him was his wife, the former Mary Welsh. She had two cracked ribs and was limping as Mr. Hemingway helped her from an automobile that brought them here from Butiaba, 170 miles away.

Although he declined an offer to fly out of the jungle after his second crash yesterday, Mr. Hemingway said with a grin that he would fly again as soon as he had found another plane.

He waved a swollen arm, wrapped in a torn shirt, and appeared to be in high spirits as he shrugged off the crashes.

He joshed his wife, saying her snoring had attracted elephants as they camped overnight near the wreckage of the first plane that crash-landed Saturday near Murchison Falls on the upper Nile near Lake Albert.

"We held our breath about two hours while an elephant twelve paces away was silhouetted in the moonlight, listening to my wife's snores," Mr. Hemingway roared.

Mr. Hemingway was examined by a doctor at Butiaba, scene of the second plane crash. An X-ray was advised, but he apparently was not badly hurt.

The first accident occurred when a Cessna, piloted by Roy Marsh, cracked up near the 400-foot falls while making an emergency landing. Search pilots who flew over reported herds of elephants near.

The second accident occurred Sunday after the Hemingways had been taken by a tourist steamer to Butiaba. There a plane, piloted by T. R. Cartwright, ground-looped into a sisal plantation and caught fire.

Mr. Hemingway said the blue and silver single-engine Cessna they had hired for the flight to Murchison Falls crashed when Mr. Marsh dived at low altitude to avoid hitting a flying flock of ibises--black and white jungle birds big enough to smash the canopy of the plane.

Mr. Hemingway said that to miss the ibises the plane had to land either on a sandpit where six crocodiles lay basking in the sun or on an elephant track through thick scrub.

Mr. Marsh chose the scrub and landed the plane with minor damage. They spent Saturday night around a camp fire surrounded by the elephant herd and caught a ride yesterday morning in a launch filled with tourists back to Butiaba on Lake Albert.

When the second plane ground-looped and caught fire. Mr. Hemingway said he butted open the rear door and scrambled out. His wife and the pilot also escaped, but all their luggage was destroyed.

Even when the first crash stranded them overnight in the jungle, Mr. Hemingway said he was not worried. "We had emergency goods, but were short on water," he said. "We took turns going to the river, but the elephants were very stuffy about it. There were lot of hippos and crocs wandering around the river bank."

The trip around Africa, he said, is his wife's Christmas present.

Mr. Cartwright, who flew here from Butiaba, brought the first details of the two crashes. He said that when he asked Mr. Hemingway about his adventures the novelist merely replied that he was "very impressed" by the wealth of big game.

The Hemingways found big brush fires burning near the edge of the Upper Nile when they first landed and set backfires to save themselves and the plane, Cartwright said.

At twilight they were forced to move back from the banks of the Nile, tormented by swarms of mosquitos.

For the last few weeks he and his wife have been on a safari on which he is writing a series of articles for Look Magazine. One of his first stops on his return to Africa after twenty years was the towering peak of Kilimanjaro.

It was Kilimanjaro that signified death to one of his heroes.

Posted by Gorillaland Safaris at 7:11 AM 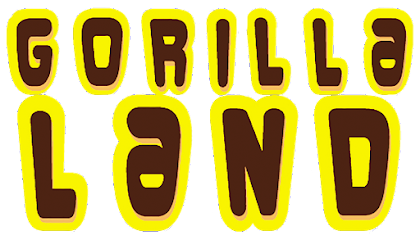 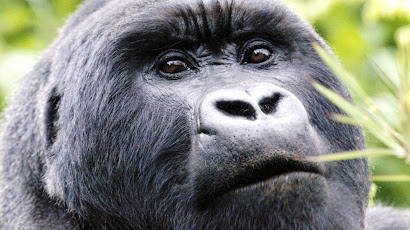 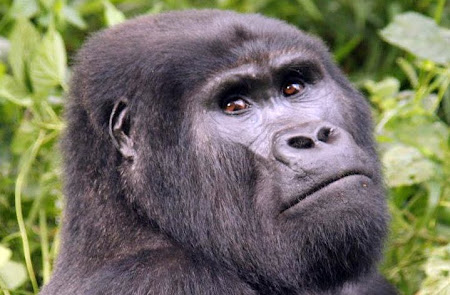 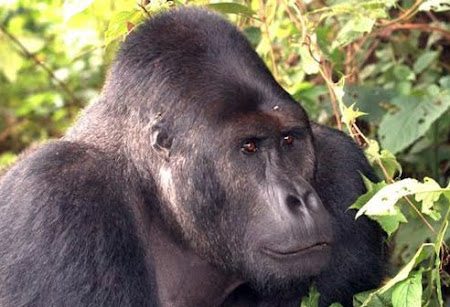 Forget your worries, come chillax with the big fellas...

Technology paves a new way to help the gorillas survive.

THIS MUST BE STOPPED!!

Our Most Popular Safaris

Promote your Page too

Daryl Hannah sets out to meet gorillas in Rwanda

Gorillas in the Mist producer returns to the Virungas

What to expect from a

Your guide, Greg Cummings is an award-winning conservationist, author, and one of the most experienced gorilla safari hands in Africa. He has been leading tours to meet your hairy mountain cousins for nearly two decades now, and knows his way around most of their habitats, including Virunga, Bwindi, Kahuzi Biega, Walikale, Mt. Tshiaberimu, Cross River and Moukalaba Doudou.

As well as some of its best wildlife, East and Central Africa have the continent’s greatest features: its highest peaks, largest lakes, thickest jungles and most teeming savannas. Whether it’s the Karamoja Apalis or Grauer’s Gorilla you’re after, we can take you in comfortable pursuit of the region’s rarest species, and into their remotest habitats. You’re in our capable hands.

Lodge facilities in Rwanda, Uganda and Congo have lately been given an overhaul, and luxury accommodation has begun to take the place of more rustic facilities, while many classic properties have received extensive renovations and improvements in service. Your stay will be in the most luxurious lodges and hotels.

All our drivers have clean records, drive carefully, and are fully knowledgeable of every route in the region. They are also trained in bird-watching and game spotting, for when you’re in the parks. Our vehicles, which we keep well-tuned and capable of handling all terrains, are specious “stretch” 4x4s with comfortable seating, and roof-top viewing facilities.

Your protection and security is of paramount importance to us. And we will never journey to any location before we are fully satisfied that your safety is guaranteed. The governments of Uganda, Rwanda, Tanzania and Kenya assure 100% security in their parks.

Our staff, in particular your safari guides and drivers, who will accompany you in these remote and spectacular locations, are courteous, knowledgeable, well-trained and very experienced in providing luxury safaris for the fussiest of clients. All of us has a single aim: to make your trip with us an experience you will always cherish. 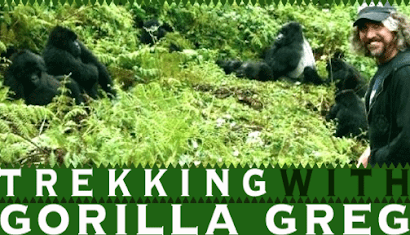 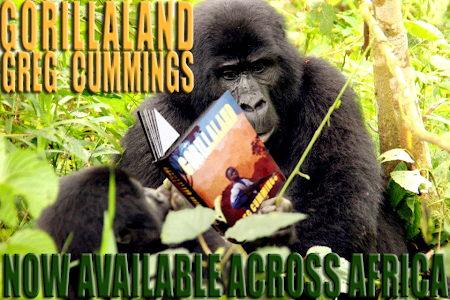 "Trekking with gorillas in central Africa" by Greg Cummings

"Conservation in the mountains of Uganda" by Greg Cummings

“Gorillas are not yet sufficiently advanced in evolutionary terms to have discovered the benefits of passports, currency declaration forms, and official bribery, and tend to wander backwards and forwards across the border as and when their beastly, primitive whim takes them.”

"There is something about safari life that makes you forget all your sorrows and feel as if you had drunk half a bottle of champagne."

“All I wanted to do now was get back to Africa. We had not left it, yet, but when I would wake in the night I would lie, listening, homesick for it already.”

Just a few of the famous faces who have trekked gorillas with Gorilla Greg over the years. Click on any of the photographs to find out more about these remarkable individuals. Without a doubt, the best job in the world... 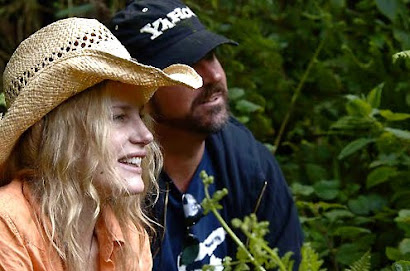 Daryl Hannah is an American film actress, best known for her performances in the films Splash, Blade Runner, Roxanne 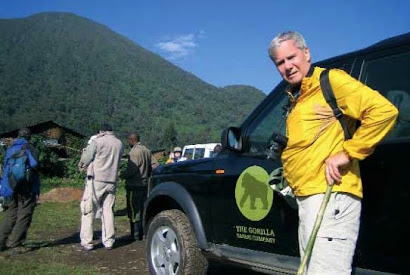 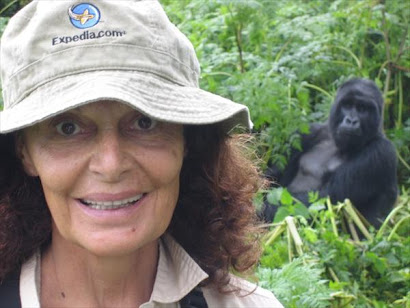 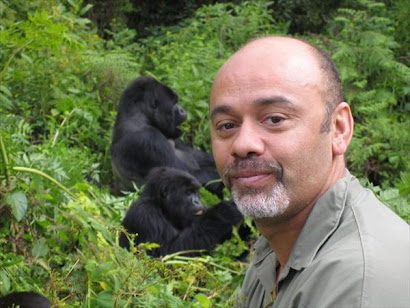 Christian Louboutin is a French shoe designer whose footwear has incorporated shiny, red-lacquered soles that have become his signature 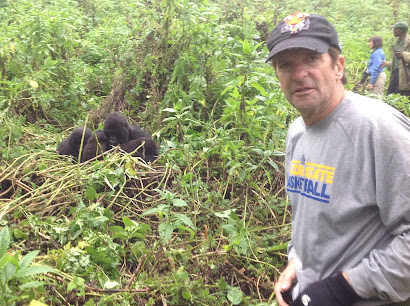 Howard Peter Guber is an American film producer and executive and Chairman and CEO of Mandalay Entertainment. He produced Gorillas in the Mist. 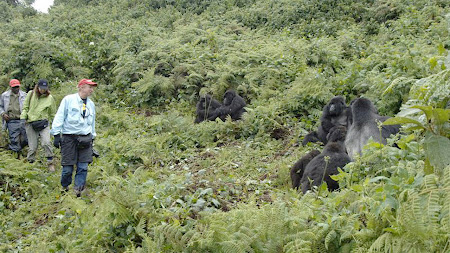 Richard Bangs’ authored “The Lost River,” about his first descents of Ethiopian rivers, including the Omo and Blue Nile (Random House/Sierra Club), and co-authored “Mystery of the Nile,” (Putnam), in 2005. 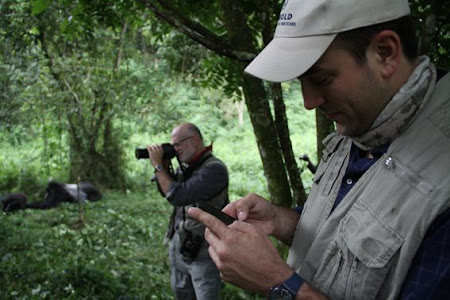 A forum for safari enthusiasts

Regular GORILLAgrams about Safaris into the Unknown